Horse with an Apple

He’s posed to catch it…but did he? 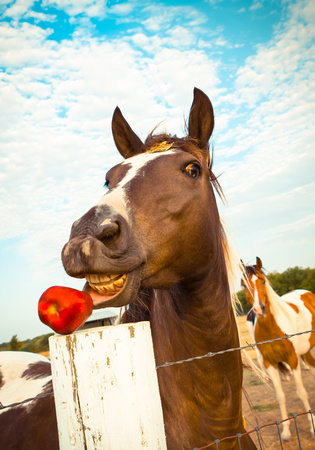 If you haven’t already figured it out, Ill do just about anything to capture that perfect shot, including trying to stage the horse catching the apple off the fence post while snapping the picture.

It wasn’t easy trying to entice only one horse to play my game - there were four others in the field, all craving their afternoon snack.  I started tossing apples in the field to each horse trying to urge the one with a blue and a brown eye over to me.   He would come over and so would the others and the mean one kept trying to kick my buddy away from the fence.  I said to myself,  “there’s no way I’m going to get an interesting shot today”.  My camera was very heavy, it was pretty cold out and my fingers were practically numb, so, I decided to attempt the shot one more time.

I set the apple on the white post, knelt down on the cold brown winter ground and took one shot, just as the apple started to fall.  The horse grabbed it, had it in his mouth, and somehow lost his grip.  I snapped the one shot just as it was falling and my buddy was trying to catch it.  I got the shot and he finally ate his apple.

Would love to receive your comments!