Footprints in the sand and no warm bodies

WHY ARE THERE FOOTPRINTS AND NO WARM BODIES? 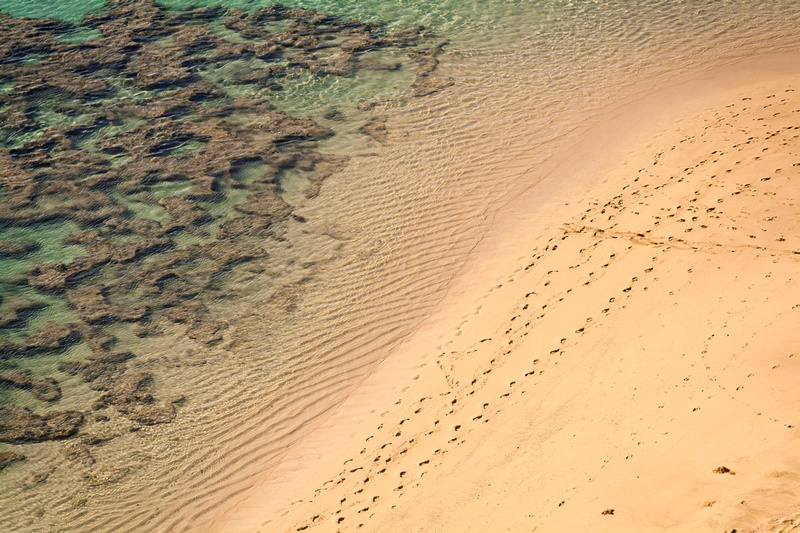 Hanauma Bay, HawaiiFootprints in the Sand

On this beautiful morning while living in Hawaii, I took off seeking interesting things to shoot.  I headed for Hanauma Bay, a protected reef and popular tourist destination on the small island of Oahu.  Expecting a packed beach with many butts bobbing up and down and divers navigating the reefs with flipper propulsion, I was shocked to find the beach empty with only footprints left behind.

What I found was a pristine beach, an abundance of coral reefs and turquoise waters glistening in the early morning light.   The patterns left in the sand at the water’s edge reminded me of a perfectly orchestrated symphony performing just for me. It was very rhythmic.  The footprints were fleeting and any wave could be the one to erase all evidence of a human’s presence.  I couldn’t wait to take my shots.

I had my 100 mm macro lens on the camera so I decided to use it and then I would switch to my 10-22mm wide angle so that I could capture the whole amazing scene.

The light was good so no need for my tripod.  Using the macro meant I had to change the angle some to include parts of the beach and the corals.   I had studied art at the Honolulu Academy of the Arts and my instructor, Anthony Lee, taught me about the rule of thirds and also that when we look at art our eyes go from left to right.  I took many shots that day changing up composition, settings and I eventually changed to my wide-angle lens.

When I looked at the finished shot in Lightroom, I realized that I had accomplished both of those rules.  The line separating the water from the beach travels from the left corner, curving up to the right and the beach is about one third of the space with the water being three thirds, just as though I had actually planned it that way…maybe I had sub-consciously.   I think learning the basics of art definitely has enhanced my artistic photographic eye.

With each click I felt the importance of this location and the significance of the reefs.  One of my good friends in Hawaii was the Executive Director for Coral Reefs for NOA covering the South Pacific, Puerto Rico and Florida waters.  Takiora shared her knowledge about the struggles of living corals around the world.  Hanauma Bay is one area that is protected and guarded from the rude and obnoxious tourists who would ruin them in a moment, if allowed.  They stand and walk on the reefs and the guards blow their whistles gesturing for them to get off.  It’s a constant pain in the neck.

So, have you figured out why the footprints are there and there are no people yet?  And, why is the beach closed on a Sunday, one of the busiest days of the week?

I really lucked out that day. My Hanauma Bay shot has garnered several awards and is published.